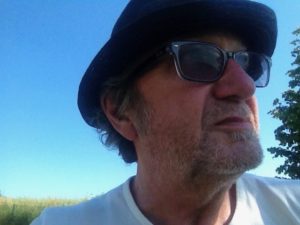 A frog, back in France again after 40 years in Sweden.

Born in 1954 in Caen, Normandy/France. During the late 60’s my music interest began to grow. A time when it happened very much musically. I listened a lot to the blues-influenced English music with band such as John Mayall and the Bluesbreakers, Cream, The Who, Pink Floyd, Beatles and the rolling stones and from the USA names like Zappa, The Band, Deep Purple, etc. .. so much Blues-rock with a swing of jazz/jazzrock.

I also studied a few years at the École des Beaux Arts in Caen and got the opportunity during that period to start working at a theater as a scenography assistant. Later on with an extension of this job in Paris during an exciting hectic year. That’s when I, as a 20-year-old, during a summer discovered ”le Languedoc”. It is also the place where I moved down with a bunch of friends from the theater in Paris with the ambition to start a cultural center in the area around Montpellier. 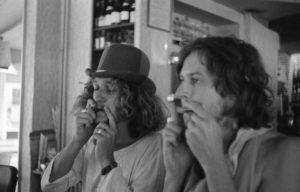 After a couple of years years I met Gunnel in this small village. Gunnel came to the village as a tourist and rented a house with other Swedes. Gunnel is also the reason for our/my move to Stockholm.

During the years in Sweden I have worked both within the film and the music industry as an IT specialist. My journey began with the fact that Svensk Filmindustri needed some kind of IT system to sell tickets in the early 90s. It was no longer possible to proceed with a the old-style ticket and I got the big privilege, together with their ”data department”, as it was called at that time, to participate in this big project to create a new sale ticket system.

It should be remembered that during the early 90’s, everything that concerned computerization was unwritten … It was definitely the pioneer spirit. I worked with that system for 20 years!! then end up in another big project in the music world to participate in the construction of an IT system that could handle the music rights at European level, also very pioneering…

During these 40 years, I have also had the great privilege of becoming the father of my wonderful daughter Fanny and later meeting with Maria and getting with her my beloved son Léon and developing a relationship with Maria’s two children from her previous marriage, Agnes and Joel, be there for them and see them develop their own lives.

So now that we, Maria and I, have ”emigrated” to France, it will of course be some trips to greet our children and grandchildren.

Year 2018, it was the year when we decided to jump out of working life a few years in advance and instead invest in exploring what it is like to live in Southern France. We sold the house in Stockholm and registered our house in Languedoc as our main address, started the whole process to register as permanent resident in France. However, we still have a country house in the south of Sweden (Österlen) which is counted as a summer residence.

When you are now stepping down completely from these large IT projects, there are some who wonder if you will not feel idle but I can only confirm that for both Maria and I this time is a time filled with creativity …
So the next few days/years will be to rediscover France … Is that what some people call ”back to the roots”? For ”back to the roots” is often a chimera! One should not move back to what one remembers from before because it no longer exists. Instead, you should see this as a new chapter with new experiences that must be taken care of with open eyes. It is also the way to enjoy the best of the new life we are creating every day. 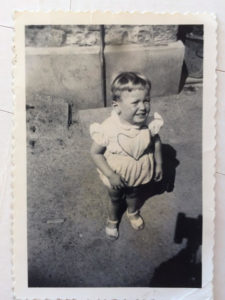